When it comes to standards written before 1920, none has enjoyed more recordings by jazz artists than W.C. Handy’s classic, “St. Louis Blues.” Considered the most famous blues composition, the song was the most-recorded of all time from the 1930’s until “Star Dust” took the title over twenty years later.

Handy, in his 1941 autobiography Father of the Blues: An Autobiography, says, “When ‘St. Louis Blues’ was written the tango was in vogue. I tricked the dancers by arranging a tango introduction, breaking abruptly into a low-down blues. My eyes swept the floor anxiously, then suddenly I saw the lightning strike. The dancers seemed electrified.”

Handy was determined to create a hit that would compensate for his loss on the popular “Memphis Blues” (1912). Unscrupulous publishers had tricked him into selling his copyright for fifty dollars, which barely covered his expenses. 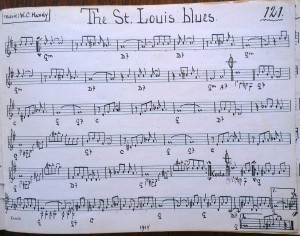